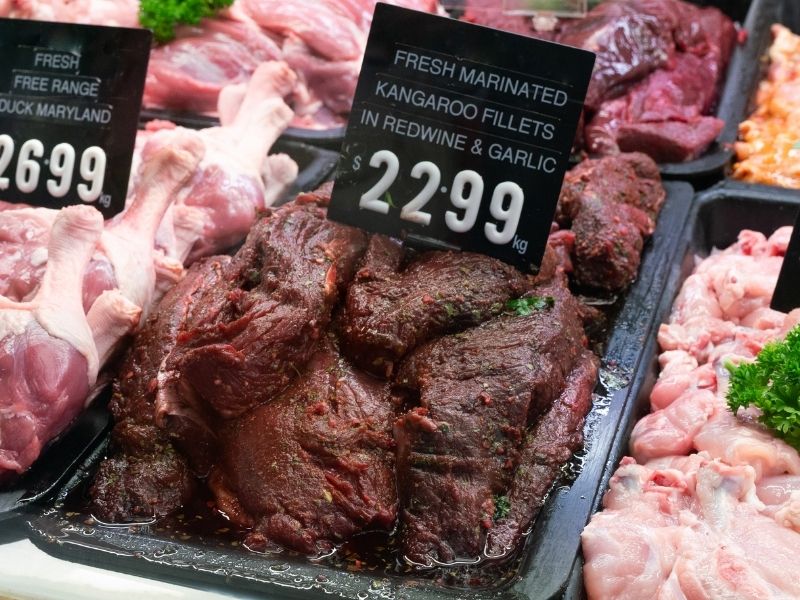 What’s the deal with kangaroo meat? It tastes good! Kangaroos are not endangered and it is a sustainable way to eat. Why should I try it? And what are the most popular recipes for kangaroo meat?

Why Should I Try Kangaroo Meat?

Kangaroo meat is a healthy, low-fat alternative to beef

Kangaroo meat is a healthy and low-fat alternative to beef. It has less fat than any other red meat, including chicken. It has lower levels of cholesterol, the risk for heart disease is reduced when you eat kangaroo meat because it contains no saturated fats.

The health benefits are also extended to people with diabetes or high blood pressure since this type of meat does not contain animal hormones that can cause problems in these populations.

Kangaroo also provides more protein per ounce than most other types of meats which makes it an excellent choice for those who want to control their weight while still getting enough protein in their diet.

Kangaroo meat is more environmentally friendly than other meats

You might not know it, but Australia is the third-largest exporter of beef in the world. Kangaroo meat has become a popular alternative to other meats because it’s more environmentally friendly than pork, chicken, and beef.

Kangaroos produce less methane gas (25 times less) than cows do. They also emit up to one-tenth as much carbon dioxide per kilogram of body weight as sheep or cows do.

They also require about half the land area that cattle need for grazing, which means they can help save open space without sacrificing food production.

Australian, New Zealand, and American restaurants are now serving kangaroo meat. Kangaroo is a healthy, low-fat alternative to beef that can help reduce the risk of developing cardiovascular disease.

The flavor profile of kangaroo meat varies depending on the animal’s diet. Kangaroos are herbivores, so their meat is more like that of a deer than beef or lamb. The taste and texture can be described as “gamey” with an earthy flavor.

The taste of kangaroo meat may be an acquired one but it is worth trying as you might find that you enjoy it! It tastes great with veggies or salad and can also be used in spaghetti bolognese or lasagne.

Kangaroos are not endangered since the kangaroo population is not dwindling

The kangaroo population is not dwindling and therefore the kangaroo species is not endangered.

The Australian government has taken steps to ensure that the number of kangaroos does not exceed sustainable levels. But it’s also important to note that they’re not at risk of going extinct anytime soon.

The conservation status for the Eastern Grey Kangaroos is listed as “Least Concern” due to their resilience in numbers, even though there are more than 18 million in Australia alone.

Kangaroo meat is a sustainable alternative to beef and lamb. Unlike cows, kangaroos do not have mad cow disease or foot-and-mouth disease (FMD).

Kangaroos are also free from hormones and antibiotics which lead to some of the health problems with meats like beef. All these factors make kangaroo meat a healthy choice for anyone looking to eat less red meat in their diet.

Eating kangaroo will also reduce your carbon footprint as it requires less land usage than raising cattle for beef production does.

Kangaroos that eat mostly grass will have a milder flavor than those that eat mostly shrubs and leaves. This is because of different bacteria found in their digestive tracts which affect the taste and smell of the meat.

Kangaroos in Australia are typically fed grain-heavy diets, while those found in America are primarily grazers and foragers. The American kangaroos have more of an earthy taste with hints of wild mushrooms and pine needles, while Australian kangaroos tend to be sweeter with caramelized flavors.

You can enjoy kangaroo meat in many different ways

Kangaroo is a type of meat that can be enjoyed in many different ways. There are so many different types of kangaroo meat, and each one has its own unique flavor.

One of the favorite ways including barbeque sautéed with garlic and onions or grilled on skewers. Kangaroos are very lean so they have a lot less fat than beef which makes them a healthier option.

Kangaroo steak is one of the most popular types and it’s very easy to cook. If you’ve never tried kangaroo before, now would be a great time to do so.

You can also make Asian stir-fry, tacos , burgers, stew, sandwiches, or even sausages with this lean red meat. It’s been on the menu for centuries, so why not try it out?

Recipe by Justine Schofield as seen on Everyday Gourmet TV.

What’s the taste like? Kangaroo is gamey meat and some foodies even prefer it to lamb or steak for its tenderness. Although it has a strong flavor, kangaroo isn’t as tough as venison can sometimes be.

Why we should not eat kangaroo?

In 2013, researchers found that L-carnitine was associated with the build up of arterial plaque. This may lead to cardiovascular disease and heart attacks. Be sure not to overindulge in kangaroo meat too.

What do you do with kangaroo meat?

It can be eaten straight-up or an even better option is to then slice it and serve it in a salad. The downside of a kangaroo being so lean, however, is that without fat running through the meat; if overcooked the dish will become dry and tough while undercooked dishes are chewy.

Can you eat kangaroo raw?

Is Kangaroo Meat Safe To Eat? When eating kangaroo meat, it is important to cook the food thoroughly and not eat any raw pieces. Eating only cooked parts of a cow or other animals might be dangerous because they could have bacteria on them that may make you sick.

The Australian Institute for Food Safety recommends cooking all types of animal meats before consuming, as well as avoiding foods like eggs when they are uncooked in order to avoid getting salmonella poisoning.