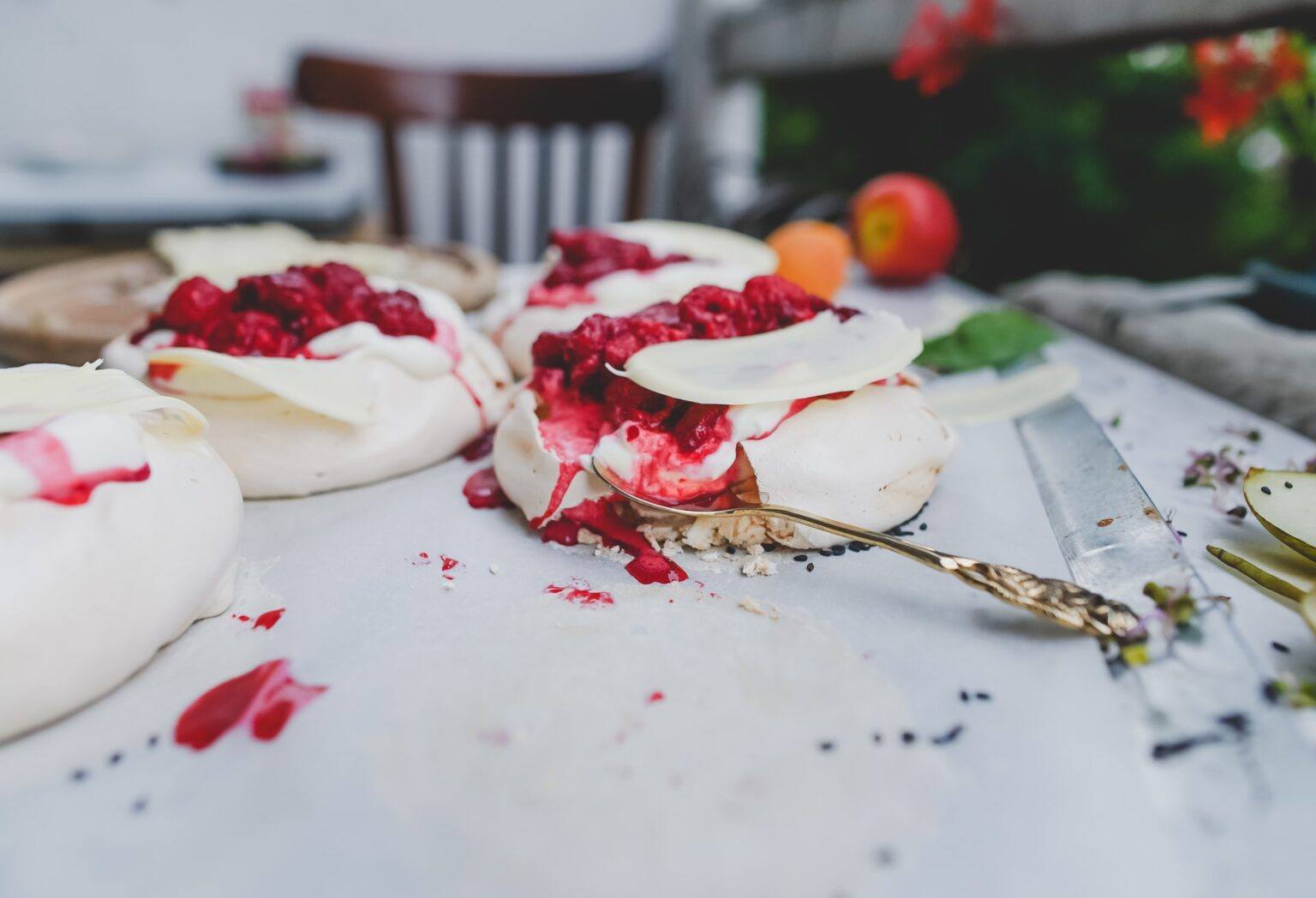 Pavlova is a delicious dessert that has been enjoyed in Australia for many years. It consists of layers of fluffy, meringue-based cake and whipped cream, topped with fresh fruit or other flavorings such as passionfruit sauce.

Pavlova became a popular dish throughout the country during World War II because it was easy to make and filling.

The pavlova is a classic Australian dessert, and it’s one of the most popular desserts in Australia. It was created by an Australian chef in honor of the Russian ballerina Anna Pavlova, who visited Sydney back in 1935.

This blog post will give you some information about this delicious dessert that nearly every Australian has tried at least once!

The pavlova is Australia’s favorite dessert. It’s made up of airy, crispy meringue and a soft marshmallow-like filling with fruit inside. A true Australian treat!

A perfect mix of the crisp and airy, a Pavlova meringue dessert is truly one-of-a-kind. A large amount of whipped egg whites gives it an incredibly light texture while just enough sugar syrup ensures that the surface crisps up into a delicate crust while also making sure the inside remains moist.

If you’re looking for something more decadent, try adding your favorite fruit flavors like strawberry or lemon to give it some extra flair!

The History of Pavlova Origin?

First of all, it’s named after Russia’s prima ballerina Anna Pavlova who was an international superstar in the early 1900s. She toured Australia and because her spellbinding performances were so popular with people here she became very well known to them as ‘Pavlova The Divine’.

The dessert is believed to have been created (or at least renamed) in honor of the dancer either during or after one of her tours to Australia and New Zealand in the 1920s.

Apart from its beauty, what makes this dessert dish so special is that it’s made up of a type of meringue which is fluffy like whipped cream filling and also has egg whites in it. To top everything off, there are fresh fruits to go inside including kiwi fruit, strawberries, and rhubarb which brings out flavors while adding another visually stunning touch to the classic look.

The early history of pavlova can be traced to Australia, where recipes for a very similar dish have been found dating back to 1906. It was called “cream cake” Then Emily Futter’s 1922 book Australian home cookery contains the first recipe we know today that resembles modern-day pavlova and is not yet known by that name. The dish was named “meringue with fruit filling.”

Is Pavlova from Australia?

This Introduction to Pavlova is a guide to one of Aussie’s favorite desserts. Filled with fascinating facts and amusing anecdotes, you’ll learn how the dessert originated in New Zealand and was given its name after a famous ballerina from Russia who toured Australia.

Why is Pavlova So Popular in Australia?

The dessert is synonymous with summer celebrations, a refreshing sweet treat on an often hot and sticky day. With many Australians being brought up to believe it to be the invention of Australians, it’s no wonder they feel such a strong affinity for this dish. The only problem is that New Zealanders also have their own claim to fame when it comes to pavlova as well.

What is the Difference Between a Meringue and a Pavlova?

Meringue and pavlova are both egg white desserts that have similar cooking methods. Meringues tend to be crispy throughout, while pavlovas are crispy on the outside, but a little softer and fluffy like a marshmallow on the inside.

So basically, a pavlova is a meringue-based dessert, but with a twist. Definitely not a classic meringue.

How Can I Find Pavlova Near Me?

There are a few ways to find Pavlova near you, but if you want it done right, go with Google Maps! With just a click of your mouse or tap on your phone screen, you’ll have the perfect way to find out where the best place in town is for this delicious treat!

However, you can actually find it at most grocery stores or other restaurants that have an international menu!

How to Make Pavlova?

Pavlova is a dessert that was created in Australia and it consists of layers of whipped egg whites, sugar, and cream. Pavlova can be served with fresh fruit or topped with chocolate sauce to make your perfect dessert!

So basically, in every Pavlova recipe, there are 3 components: The meringue base. The Whipped cream. Fresh fruits.

Pavlova is not only delicious but also pretty easy to make. Follow these simple steps:

Pavlova is an easy dessert that can be made with ingredients you are likely to have in your kitchen. It’s perfect for any occasion, but especially the holidays. Here are a few variations of Pavlova’s traditional recipe.

For chocolate lovers, try adding melted chocolate chips and cocoa powder to the meringue mixture before baking it for about 30 minutes at 350 degrees Fahrenheit.

If you want something fruity, add fresh fruit when serving after it has cooled down from being baked in the oven. Strawberries or raspberries work well as do bananas or pineapple if they’re available! Be creative and experiment with different fruits until you find one that fits your taste buds best! You could even use blueberries.

Pavlova is a traditional Australian dessert that has been enjoyed for decades. This blog post should give you some information about the history of this popular dish, as well as how to make one yourself! Have you ever tried pavlova? Let us know in the comments below what your favorite part of it was.