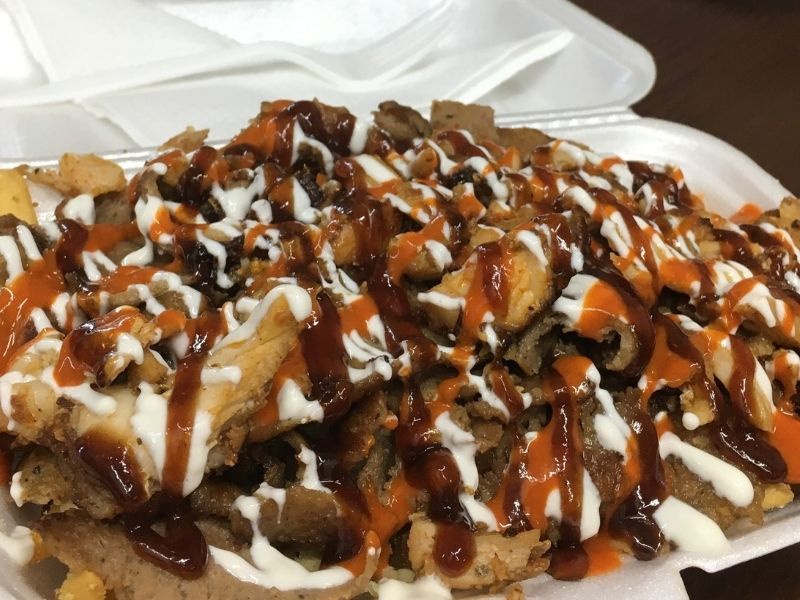 What is a Halal Snack Pack? What’s in it? And where can we buy it?

This blog post will talk about the Halal Snack Pack in Australia. I’ll review what a Halal snack pack is, and what is in it that makes it special. And then, I’ll then list some of the best options available.

What Is Halal Snack Pack?

A good halal snack pack is really bloody delicious. “At a simple level, it’s chips and meat with the holy trinity of sauces: garlic, chilli and barbecue,” Dastyari said. When you bite into this tasty treat your mouth water instantly from all three flavors in one go! The trick to achieving that delicate balance between the juiciness of the meat and crispness of the chips without any sogginess comes down to how long they’re fried for.”

When you think of a kebab shop, the first thing that comes to mind is the iconic styrofoam container holding their famous snack pack. The scrumptious, meaty, and greasy combination includes chips, onion rings, or french fries; pita bread with tomato sauce usually served with doner.

Some Australian restaurants are changing the way they refer to their halal dishes, switching from “halal snack pack” to terms like mixed plate or HSP.

What Is in a Halal Snack Pack (HSP)?

A halal snack pack is a fast food dish that consists of doner kebab meat (lamb/chicken/beef) and chips. Different sauces, such as chili, garlic, or barbecue are common to find on this delicious meal. Yogurt cheese jalapeño peppers and tabbouleh can be popular additions for some spice!

The History of Halal Snack Pack or HSP

The halal snack pack is an Australian creation, but its creators were immigrants or descendants of recent immigrants from the Middle East and Europe.

The halal snack pack is a plate of deliciousness that combines the great taste and variety of Middle-Eastern cuisine with European classics. And then it becomes Australia’s famous dish. You’ll be able to find all your favorite flavors in one place!

“The variations or similar dishes of HSP exist in other countries; examples include ‘doner meat and chips’ in the United Kingdom, “döner teller” (‘doner plate’)in Germany, “kapsalon” (‘barbershop’)in the Netherlands and Belgium,”gyro fries'” in the US. In Adelaide South Australia dish is known as an AB.”

This led to widespread media coverage and a notable reference by Senator Sam Dastyari in Australian Parliament during a debate about halal certification, which is credited for much of the increase in attention paid to this dish.

A good halal snack pack is really bloody delicious. “At a simple level, it’s chips and meat with the holy trinity of sauces: garlic, chilli and barbecue,” Dastyari said. “The trick is to achieve a delicate balance between the juiciness of the meat and crispiness of the chips without any sogginess.”

Why do Muslims Eat Halal Food?

Halal food is food that Muslims can eat and still adhere to their faith. They do this by following the dietary laws laid out in the Quran. These rules include, but are not limited to: no pork, meat must come from an animal that is slaughtered in a specific way (cutting of jugular vein), and animals should be killed as quickly as possible.

The idea behind these rules is that it makes for cleaner eating habits – both spiritually and physically. It also shows respect for life because animals are seen as God’s creations just like humans so they deserve respectful treatment before being eaten.

Halal food has grown in popularity over the years with many people now preferring it to non-halal foods, even if they’re not Muslim themselves.

What does HSP food stand for?

HSP stands for Halal Snack Pack. The halal snack pack has now been named People’s Choice Word of the Year 2016 by Australia’s Macquarie Dictionary. A “snack-pack” is a hearty pile of kebab meat, chips, and sauce which has become a staple at any Australian takeaway shop.

What is the holy trinity of sauces?

The holy trinity of sauces: garlic sauce, barbecue sauce and chilli sauce. Some prefer hummus while others go sweet with a little salt in chili. And never ever will you find tomato on the table! Sauces should be applied liberally to provide an exciting flavour explosion for your taste buds.

How much is a HSP?

The price can range from $10AUD to $20AUD, which is still pretty affordable considering the amount of food you’re getting. If it’s enough for more than two people then we think that it’s definitely worth splitting the cost!

Are HSPs bad for you?

An average kebab contains a whopping 2,000 calories and 80% of your GDA. The nutrition stats are shocking too: the fat content is around 40g – which is more than double an adult’s daily allowance – alongside over 4 times their recommended salt intake!

A delicious and hearty snack pack with a thick, rich taste. Anyone looking for an easy way to enjoy the season might want to try this! It’s very bad for you but it tastes really good.

The solution: share or split the pack! Don’t enjoy it by yourself.

Where Can I Buy HSP in Melbourne?

There are so many places in Melbourne, especially kebab places, that offer HSP. Below are 5 popular kebab places that are famous for the HSP.

A food delivery service is running out more Halal Snack Packs than any other dish to Melburnians with the late-night munchies.

UberEats has announced HSPs, with their combination of sauces over doner kebab meat and chips, have toppled chicken nuggets as Melbourne’s most popular post-midnight delivery.

Where Are the Most Popular HSP Near Me in Sydney?

With so many kebab places in Sydney, here are the top 5 that are famous for their HSP.